This is a story published by UK Daily Mail this morning. They are accusing Bishop Oyedepo's Winners Chapel of exploiting their worshipers and receiving over £16 million in donations from them. See it below... 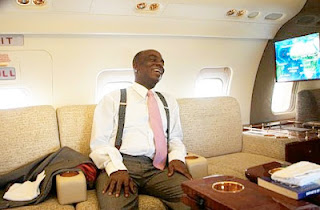 A church run by a controversial multi-millionaire African preacher has been accused of ‘cynical exploitation’ after its British branch received £16.7 million in donations from followers who were told that God would give them riches in return.
Followers are ferried in double-decker shuttle buses to the church, handed slips inviting them to make debit card payments, and are even told obeying the ministry’s teachings will make them immune from illness.
Today’s Mail on Sunday revelations about the Winners’ Chapel movement have prompted the Charity Commission to review the charitable status  of the church – one of the fastest-growing in the UK.
Winners’ Chapel is part of a worldwide empire of evangelical ministries run by Nigeria’s wealthiest preacher David Oyedepo, who has an estimated £93 million fortune, a fleet of private jets and a Rolls-Royce Phantom. 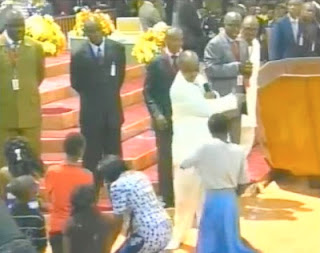 Dubbed ‘The Pastorpreneur’, he was accused earlier this year of slapping the face of a young woman he said was a witch. The assault case was struck out but is being appealed.

Branches of the church have sprung up in major UK cities in a huge recruitment drive centred on Mr. Oyedepo’s ‘prosperity gospel’. This claims that congregants who make regular donations and pay tithes – a ten per cent levy on their income – will be rewarded financially by God.

Followers are urged to target vulnerable people such as the lonely, the sick, the homeless and the suicidal as potential candidates for conversion.

Last night, Labour MP Paul Flynn said Winners’ Chapel was cynically exploiting supporters. ‘They [Winners’ Chapel] are making clearly spurious claims and it seems to be a cynical exploitation of the gullible,’ he said.

Referring to the slapping incident, Mr. Flynn added: ‘What is also alarming is the reported violence and the lack of respect for the status of women. It’s taking us back to a previous age of ignorance and prejudice that we all thought the church had escaped.’

This newspaper’s investigation can further disclose:

In the past three years, Winners’ Chapel churches have been established in Liverpool, Birmingham, Leeds and Bradford, adding to those in London, Manchester, Dublin and Glasgow.

The reporter saw a payment slip being given to every person entering the church encouraging them to donate money by cheque or cash or to fill in a form with their debit card details. The slip said tithes should be paid separately using a ‘Kingdom Investment Booklet’ and the reporter was informed that payments could also be made by phone. A pastor told the worshippers: ‘You shall be financially promoted after this service in Jesus’s name if you are ready to honour the Lord therefore with all your givings, your tithes, your offerings, your Kingdom investment, your sacrifices.’

Congregants were told to fill in their slips and hold them above their heads while the donations were blessed. 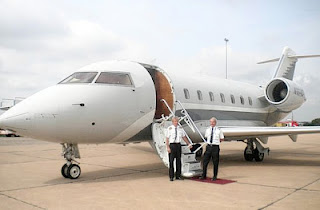 The service was interspersed with testimonies. ‘I received a bill from  the bank that I didn’t understand, so I prayed,’ said one congregant. ‘A few days later, the bank wrote to apologize for their mistake – Hallelujah!’ ‘Hallelujah,’ the audience shouted back.
Congregants were told they could gain favour by persuading others to follow Mr. Oyedepo’s teachings. His son said: ‘Look around you. Someone is sick and already wishing he or she were dead, that is a fruit ripe to harvest. Someone is confounded and considering suicide as an option, that is another fruit that is ripe to harvest.
‘Someone else is lonely and wondering if there is any future for him, that is another fruit ripe to harvest.

‘Also there are many men and women, young and old that are homeless, these are fruits ripe to harvest.’

The reporter was taken, with 20 other new recruits, to a room where preachers gave sermons claiming acceptance of the Lord would prevent them ever being ill or suffering misfortune.

The Mail on Sunday has seen video footage of Mr. Oyedepo striking a woman across the face and condemning her to hell after she said she was a ‘witch for Jesus’. He attacked her in a Winners’ Chapel super-church, believed to be in Nigeria, in front of worshippers. A separate video shows him saying: ‘I slapped a witch here last year!’
In May, he was sued for £800,000 over the alleged assault. The case was struck out – a decision which is now reported to have been appealed.

The Winners’ Chapel movement, also known as the Living Faith Church, has hundreds of churches in Nigeria and across Africa, the Middle East, the UK and the US.
Mr. Oyedepo has received fierce criticism in Africa. One Nigerian journalist accused him of ‘leading a growing list of pastorpreneurs – church founders exploiting the passion and emotion that Christianity commands to feather their nests’.

Catholic Cardinal Anthony Okogie criticized such preachers for placing materialism above Jesus’s message. He reportedly said: ‘They have been skinning the flock, taking out of the milk of the flock.’

Among Mr Oyedepo’s fleet of aircraft are said to be a Gulfstream 1 and Gulfstream 4 private jets. It is also claimed he and his wife, Faith, travel in expensive Jeeps flanked by convoys of siren-blaring vehicles. He is the senior pastor of Faith Tabernacle; a 50,000-seat auditorium in Lagos reputed to be the largest church in the world, and runs a publishing company that distributes books carrying his message across the world.
His other business interests span manufacturing, petrol stations, bakeries, water purification factories, recruitment, a university, restaurants, supermarkets and real estate. The latest addition is a commercial airline named Dominion Airlines.

A Charity Commission spokesman said: ‘The Charity Commission is currently assessing what, if any, regulatory role there is to play with regard to the complaints made against the World Mission Agency. It is important to clarify that this does not constitute an investigation at this stage.’

Winners’ Chapel administrator Tunde Disu declined to comment.
NB: I guess there is probably nothing that The Mail newspaper unearthed in the Winners’ Chapel in the UK that does not happen on a larger scale in Ghana......Of tin gods, holy dictators and anointed tyrants.