A cartoonist for Uganda's The New Vision newspaper summed it up: a woman in a miniskirt leans into President Jacob Zuma's bedroom, where he is in bed with his three wives.

"Sweetie, I've come to pick up money for baby's Pampers," she says, while in the background a politician speaks to a crowd demanding they "stop having multiple sex partners and unprotected sex".

As news of the president's love child went viral, the continent talked back. It wasn't all bad news, though. Zuma found some pockets of love from Africa.

In Kenya's Daily Nation, one reader wrote in to say the media must "kindly back off and leave JZee alone".

"It's in the interest of the Zulu culture to have as many children as possible," the reader noted. "What you guys are doing is like telling the Maasai to stop herding cattle …"

But another hit right back: "I am not sure what African custom/tradition some of you are purporting to defend. In my African customs you and Zuma would be rolled down the hill in a bee-hive."

"It is sad that at the World Economic Conference in Davos, Switzerland, the [most] exciting contribution from South Africa had nothing to do with economy and development but President Zuma's statements about his polygamy, his promiscuity and Zulu culture," he wrote.

He warned that, in the eyes of ordinary Africans, South Africa appears to be going the same way as the rest of the continent.

"In a country where women's rights used to be taken seriously, his treatment of women as sex objects puts all South African women to ridicule. Polygamy may be accepted among his Zulu stock, but his fathering of a love child raises grave moral questions."

Well-known Zimbabwean journalist Basildon Peta wrote that a scandal of this magnitude in a Western democracy would have seen a leader like Zuma tossed out of power.

"Mr Zuma is unlikely to leave office despite the mounting pressure on him," Peta lamented on unfreemedia.com. "His largely illiterate supporters, his main power base in rural areas, will keep him in office."

But the SMS of the day on The Namibian scolded those who dared to challenge Zuma's freedom to breed, channelling ANC Youth League leader Julius Malema.

"It is disappointing to see and hear people talking left and right about the now famous African child, but nobody is reminding them about the respect that they have to maintain towards all the elders," the paper's website noted. "We are living in fear, African children please behave."

Mills’ Chief Of Staff Imports 2,150 Bags Of Rice! – The Evidence 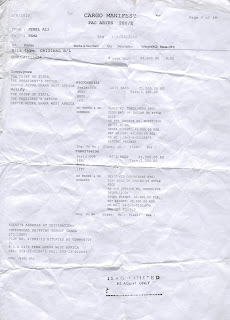 Mr. John Henry Martey Newman, the Chief of Staff of President Professor Atta Mills is a Ricemaster! He has imported two containers full load of Indian US Style Rice with each containing 1075 bags.

The rice coming from Port Jabel Ali in Dubai with the agent’s address at the destination of the goods as Intermodal Shipping Agency Ghana (ISAG) located at Community 2.

The consignee of the 2,150 bags of rice is the Chief of State, the President’s Office, Castle, Accra, Ghana West Africa but this paper’s check in Dubai indicates that the rice were meant for the Chief of Staff.

Last week Thursday when this paper got into contact with the shipper in far away Dubai, the only response we got was “what do you want from us; the rice is for the Chief of Staff”.

A day after the call from this office to Dubai, an agent was seen at the offices of ISAG trying to go through the formalities so that the goods can be cleared following which this paper alerted Mr. Samuel Okudzeto Ablakwa, a deputy minister of information for him to pass this information on to the National Security.

As at press time yesterday when this paper got into contact with Samuel Okudzeto Ablakwa, he said, the rice is still at the port and investigations are still underway.
Posted by Unknown at 2/10/2010 2 comments:

Nothing is working in Ghana and we don’t know who is in control, the greedy bustards or the inward looking guys but we are at least much better than South Africa where the people are now saddled with a problematic President.

The problem with President Jacob Zuma is not a disease but his reckless libido. It is sad that at the World Economic Conference in Davos , Switzerland , the more exciting contribution from South Africa had nothing to do with economy and development but President Zuma's statements about his polygamy, his promiscuity and Zulu culture.

Democracy throws up all sorts and that is probably what makes it beautiful. Whatever it throws up, society gets a chance to learn fresh and often unimaginable lessons. After the end of apartheid, South Africans had Nelson Mandela as President. He is father of the nation, the eternal symbol of South African renaissance.

His successor, Thabo Mbeki cut a fine picture of decorum and dignity. The current President is neither Mandela nor Mbeki: he has nothing of their attributes. He came to power riding the wave crests of populism but as President he has robbed the office of its gravitas, turning South Africa into a laughing stock.

He has confirmed the average African's worst fears, that in good time, South Africa often touted as a special African country (under Mandela and Mbeki) will go the way of other African countries. Zuma , South Africa 's most prototypical African President to date, has proven this to be true. In a country where women's rights used to be taken seriously, his treatment of women as sex objects puts all South African women to ridicule. In a country where HIV/AIDS poses a serious public health challenge his love of unprotected sex jeopardises the safe sex campaign. Polygamy may be accepted among his Zulu stock, but his fathering of a love child raises grave moral questions.

Zuma has 20 children from so many women. A former wife committed suicide claiming that marriage to Zuma was "hell". He has three official wives, all playing the role of First Lady collectively and in turns. The mother of his latest child, a love child, is the daughter of his friend, Irving Khoza, head of South Africa 's World Cup 2010 organizing committee and owner of the Orlando Pirates football club.

Zuma has had to pay a fine as Zulu custom requires for putting Somono Khoza in the family way outside wedlock. He insists that he loves his wives equally. He was once quoted saying he could not contract HIV because he took a shower after having unprotected sex. Jacob Zuma may be good at winning popular votes, but as President, he is working too hard at becoming an embarrassment to his country.

He has complained about excessive media scrutiny of his private life. He talks about his cultural rights. How about his responsibilities as a national role model? His party, the ANC is preaching a "one partner" message to curb the spread of HIV/AIDS but the President keeps many women and talks about cultural rights. In 2005, he was accused of raping another friend's daughter.

He is scheduled to visit the United Kingdom in March as a guest of the Queen. In June, South Africa will be hosting the World Cup. What will South Africans do with their President: other men will be afraid to leave their wives alone with him for a second.

While Jacob Zuma hops from one bed to another, the black voting majority which brought him to power in the hope that he will show a better understanding of their plight in post-apartheid South Africa is badly short-changed. They remain poor, homeless and alienated as they keep wondering: what has the end of apartheid brought us? The opposition wants President Jacob Zuma to undergo a sex-addiction therapy. ANC members want Zuma to be left alone.

They should be singing Lethu Mshini Wani (Bring me my machine gun) and their guns should be trained on Zuma if that will force him to concentrate on the job. It is a shame.
Posted by Unknown at 2/08/2010 7 comments: