A Letter To Gbevlo Lartey 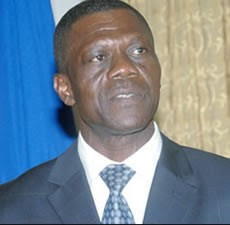 The National Security of this country has been entrusted into the hands of a boy by name Larry Gbevlo Lartey. A boy in mind and at heart though he is advanced in age.

That is the only reason he would be senseless enough to personally issue threats at the editor of this paper. Someone should tell that boy to do his worst. Death is the ultimate. It is an inevitable end. Beyond that there is nothing he can do. He should abduct us (as he did to our editor on March 16, 2011), torture us, detain us, kill us and burry us in mass graves. After that he should live forever or perhaps grow and metamorphose into a hard rock.

Many at times, we make the mistake of thinking that any male child who crosses his teen years automatically becomes a man. Nothing can be further from the truth. Being a man is not about age, neither is it about muscles. It is about having brains that work, a mature attitude and having a sense of responsibility.

That Gbevlo boy, instead of focusing on his job and respecting the authority that appointed him, wastes his time on petty trivialities and hops from one radio station to another talking like a parrot that has eaten too much pepper.

Instead of finding solutions to the security concerns of this country, that Gbevlo boy, would spend his time monitoring and doing a near-espionage on journalists and editors who he thinks are critical of him.

He is yet to appreciate that the two idiots trailing workers of this newspaper are simply on a wild goose chase. It is either they spend their time celebrating laziness and go to him with bogus information, or they simply see him as someone whose instructions are not worth following.

That is the only reason they would (mis) inform him that someone in this office meets with a certain top military officer for information. When we heard it, we laughed and popped open a bottle of (none alcoholic) champagne because we got delighted the dudes are reading from an old dusty diary.

What amazed us the most was the fact that the journalists he is sponsoring with the tax payer’s sweat at Dzorowulu seems to be more current with information than the two lazy idiots who think they are trailing journalists. If Gbevlo had asked his journalists, they would have told him that we now have eyes and ears in his own office.

Just when we were wondering whether or not the Gbevlo guy would ever grow into a man, we heard him on radio justifying the senseless attack on Gifty Lawson, a female photo-journalist who was lawfully going about her duties.

The poor lady was taking photographs of a suspect on the compound of a court, outside the court room when Gbevlo’s boys grabbed her, assaulted her, put their filthy hands into her panties in public, abducted her and shoved her into their vehicle, dumped her at the headquarters of the Bureau of National Investigations (BNI) and released her hours later with no charges and no apologies.

Yet Gbevlo sees absolutely nothing wrong with this? That is the attitude of a boy. Boys never accept mistakes. They never take responsibility. They have an allergy for the three magical words “I am sorry.” They use their muscles to bully girls. They act with their hearts rather than their heads.

It is only a boy who would live in a glass house yet have the guts to throw stones. A boy would have dry raffia stuck in his pants yet would jump over fire. Instead of investigating how his own signature got forged in his own office and used to cash huge sums of money, the Gbevlo boy is running round chasing after lizards and hurling stones at them. Our only regret is that he is paid with our taxes.

It is still a mystery why the President exercised a voluntary blindness to the several mature minds that wanted the job and gave it to this boy.

The hens have come home to roost and Gbevlo has proven that when you give your pearls to swine, they trample on it.
Posted by Unknown at 1/24/2012